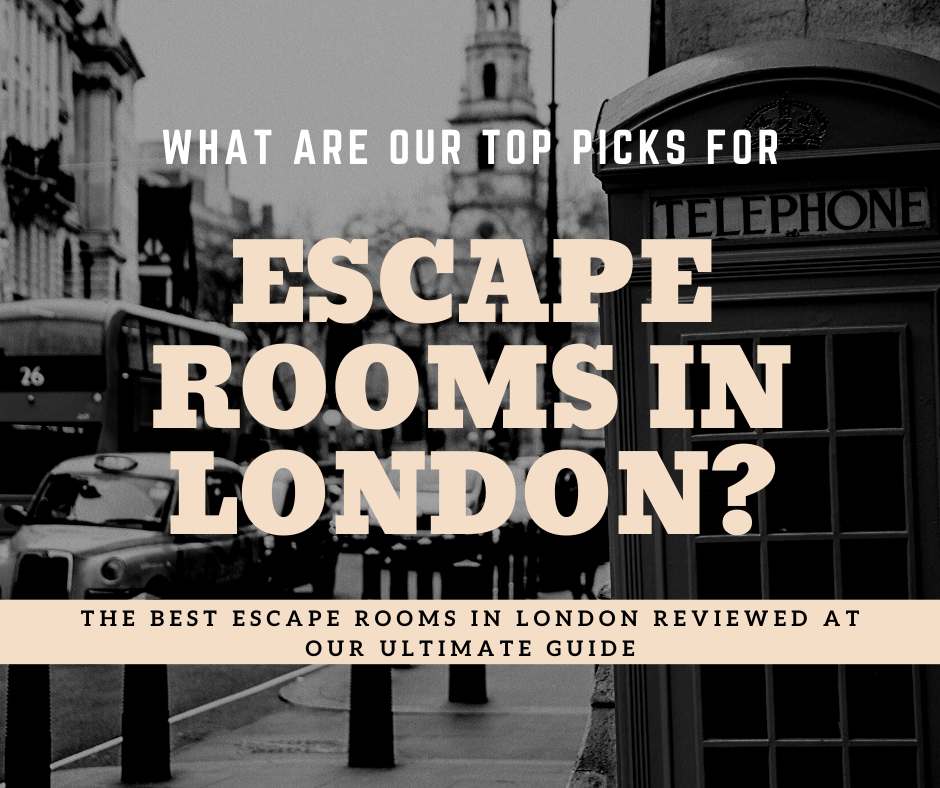 London has become one of the top places to explore escape rooms and while it is great to have so many options across different price points and themes it can sometimes get overwhelming when you have too many options to choose from. We’ve considered a couple of factors in this article to help you figure out which escape room would best suit your taste. The most important factors to consider are what type of adventure suit you the best, who are you going with and what’s your price range. Across all these three metrics you will come across hundreds of options designed for specific groups on the escape room London scene. Here’s we’ve combined the best options based on the number of people going, the price point and the style of the said escape room.

This activity has become so popular that you will see an escape room in every part of the city. London has multiple venues that offer holiday-themed escape rooms, different adventures for corporate events, team building escape rooms and so on. If you live in London or are planning to visit the city in the future here are some of the best escape rooms to consider if you love these types of adventures and want to explore the best of what London has to offer.

We’re starting our list with the most awarded escape room from Komnata Quest, which centers around an old cruel Japanese tradition, where young samurai warriors were tested by going through a mystical Maze filled with demons. In this escape room 2 players can engage, or you can go with a larger group. When you book the escape room your goal is to save a little boy who has been trapped in the maze and you have to do it in an hour. This is a great escape room to choose if you’re going with a larger group since the whole venue is pretty big since the story revolves around a maze. It is engaging, but not overly difficult if you want to introduce escape rooms to some of your beginner friends or maybe you’re a beginner yourself. The good thing about escape rooms like these is that the stories are engaging enough to actually keep you motivated to keep going. Often times you will encounter the lazy storylines that rely too much on the scary aspect of an escape room and if you’ve never been to an escape room and your first visit ends up being at a venue that does lazy storytelling, of course, you will feel like you wasted your money. There’s a reason why this specific escape room has so many awards, including 2019 the USA’s Best Escape Game Escape Authority and 2018 Best Venue Escape Authority. It is also the most high-budget escape room in London and seems like all their efforts paid off.

You probably already know that escape rooms are a great way to build a deeper connection in groups and to enhance the team working abilities. And while regular escape rooms can do that as well, since London became a center for the escape room industry, you can now find a company that focuses on building escape rooms specifically for coworkers and companies wanting to enhance the communication within their team. ClueQuest, or ClueQuest Assessment program is a behavior assessment, that uses immersive escape rooms to engage the teams and to educate them on how to work better. ClueQuest has escape rooms for more than 6 players so it can be enjoyed by a big branch as well. This is the definition of mixing work with the play since it feels way less tedious than a team-building seminar in the office. It actually puts people to action and makes them connect on a more personal level. This escape room also doubles as a recruitment strategy for companies so that they can distinguish between people willing to take action and those who are more likely to stay in the background and contribute very little. So if you are a part of the team or want to create one you should also consider ClueQuest and its unique approach putting escape games to some good use.

Now back to escape rooms that are not connected to your work whatsoever, Enigma Escape room is one of the most popular games in London, because of its simplistic story that is heavily focused on puzzles and forces you to use logic to get out of the room successfully by looking out for the clues and putting together different hints in order to come out of it “alive”. This escape room can accommodate 2-6 people so it is good for friend groups and families but is also the best escape room for couples. This is a great way to put your wit, intelligence, and logic to some good use and also engage with whoever you’re with, to deliver better results and get out of the room faster. This one may seem a little basic, but it’s done very well and won’t leave you feeling like it’s either too easy or lazy. The reason why so many people love it is because it relies heavily on your wit and ability to think creatively under pressure, those of us who love these types of challenges over more stressful and scary escape rooms this is a perfect choice for either your first escape room experience to get into it in and put your brain to work under pressure to complete the task in 60 minutes. Enigma escape is a fully immersive experience and despite being ‘logic’ based it still has some interesting plot twist and characteristic that distinguished it from a regular logical task. It is still fun and mixes actual brain work with entertainment. If these sorts of escape rooms sound like your cup of tea then don’t hesitate to check out Enigma escape London.

Wizarding School: Fang of the Serpent

One of the most exciting trends we’ve seen in this industry is the pop culture themed escape rooms. Since Wizardry is one of the most loved themes of all time and it is no surprise that escape rooms caught up with the trend and decided to center a whole game around this topic. In this escape room, the storyline follows a similar script to Harry Potter and definitely has the design elements of Hogwarts. Escape rooms like these are a great option for those who don’t necessarily like the pressure of solving complicated puzzles or the scary escape rooms where you don’t know what’s gonna greet you at the next corner. While it is still somewhat spooky and requires teamwork and logical thinking it is less complicated and the focus is shifted more on the experience and the wizardly atmosphere which makes it one of the best escape rooms in London. This game can be played by 3-6 people and despite its storyline is actually quite complex and requires a lot of teamwork between you and other participants. But if you are a Harry Potter fan or you know someone who is, don’t miss out on experiencing the closest thing to Hogwarts in real life.

We’ve decided to include one more pop culture-inspired game because this one is actually VR based. Be is an artificial intelligence escape room or the VR one, Escape rooms that feature technological innovations are not all that mainstream but we’ve been seeing a lot more of these options in the last two years and it will likely become more popular this year. This escape room was created by the original developers of Assassin’s Creed, The Ubisoft team and it is available at selected venues in the UK. The fact that the original creators of the game we’re involved in the creation of this escape room is a clear indication that this is the one that’s actually worth checking out if you’re a fan of the game. We talked about immersive escape rooms above, but this takes that definition onto a whole new level. VR escape rooms create an even more realistic experience that is not just meant for the fans of the game. You can enjoy Assassin’s Creed escape game even if you’ve never played the game before. This is one of the most unique escape rooms available right now so if you love the game or the idea of a VR escape room sounds appealing to you don’t hesitate to check it out and experience it for yourself.

Is an escape room a great idea for a date?

Should you spend Valentine’s Day in escape rooms?